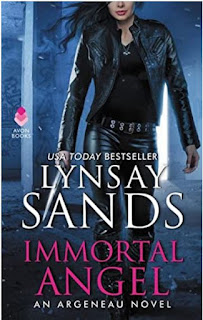 Ahhhh...the Argeneau world is like coming back to an old friend. I can’t even remember how long I have been reading Lyndsay Sands books, but they sure do make for a fun and romantic escape. Well, at least while the couple’s story is being told. I guess some of the storylines have some bloody scenes. 😂 I do love that Sands gives her characters equal opportunity. In this particular story, Ildaria Garcia is a kick-ass vigilante when it comes to helping women fight off their male attackers. Her actions do draw the attention of Lucian, so she is reluctantly forced to move to Toronto and has been given a stern warning about beating men up. Ildaria is settling into her new life and she is savoring it because she has been on the run for 200 years and is tired of it. She is going to school for an accounting degree and because of that, agrees to do bookkeeping for Joshua James Simpson Guiscard, aka G.G.. G.G. is a sexy mortal who operates an immortal bar. His parents are both immortal, so that is why he is accepted. Since they are our two main protagonists, you can guess that they are life mates. The problem in this coupling is that G.G. does not want to become immortal. He witnessed his mother’s transformation and has been scarred by that childhood memory. His mom has not been able to convince her son otherwise.

As we delve deeper into Ildaria’s past, we learn a lot about the experiences that shaped who she is today. I think it is pretty powerful that G.G recommended counseling before they got intimate to help Ildaria move forward from her past trauma. Also, helllloooooo steamy sex scenes with my favorite paranormal twist. Lucian cracks me up. It’s not that he is trying to be funny, but being one of the oldest immortals, he just doesn’t do small talk and other socially appropriate things. He sure is blunt and no-nonsense. Sometimes those scenes make me want to reread Lucian’s story. The resolutions are satisfying and I hope there are tidbits about how they are doing in future books. I love this world that Sands has built. I love all the character names...the best names can be found in this series. Anytime she has a book release day, I am nowhere to be found, enjoying my escape in the newest storyline.
at April 28, 2020

RomanceLibrarian
Welcome to my site celebrating romance books. These are my recommendations. If it's posted here, I loved it! I love historical, contemporary, romantic suspense, paranormal, erotica and maybe a few others with a happily ever after. I'm a librarian with no time for negative reviews. If I didn't like a book, I just quietly set it aside. I love introducing new readers to my favorite genre.